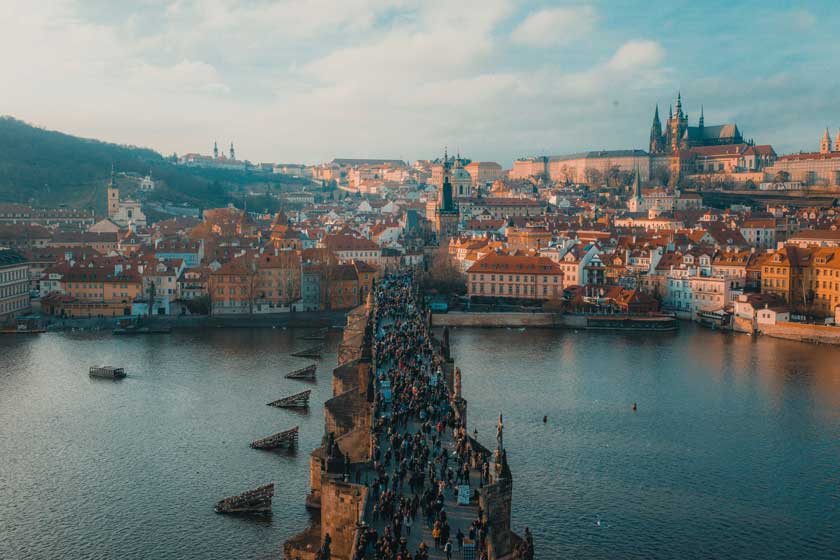 According to one legend, Prague (the capital city), its magnificent destiny was prophesied even before its founding; “I see a great city whose glory will touch the stars.” These words were uttered by the mythical Princess Libuse supposedly determined the place in the deep forests around the river Vitava where the first inhabitants were to build a castle and thus the foundation for a new town.

Do you want to hear more stories? But first, let us know the destination first.

The country has several centers for tourist activity. They do have Spa towns for relaxing holidays, Architectural heritage for magnificent castles and chateaux from different historical époques, has a total of 12 cathedrals and 15 churches - modern and ancient, various museums to learn the long standing history, and number of beer festivals that are usually 17 days long celebration every year.

And one more, Czech cuisine is marked by a strong emphasis on meat dishes. Fish is rare, with the occasional exception of fresh trout and carp, which is served during Christmas. Along with it, tourists are visiting Czech Republic because of its wine that has been produced since the Middle Ages and a large variety of local sausages, pates, smoked and cured meats.

So, I think it’s time now to get acquainted.

The high season is from June to August. The weather will be quite warm in July and August, and there will be large crowds during this time. During winter time (November – March), the weather can get rather cold, and a lot of smaller places of accommodation will closed for the season but Christmas markets are a sight to see during these months. The best time to visit is during spring (mid-March to mid-May) and fall (September-mid November). This is when the tourists are just right, and the weather is consistently pleasant.

TOP THINGS TO DO IN CZECH REPUBLIC

INDULGE ON DINING EXPERIENCE - Enjoy a memorable medieval-style feasting with a home-cooked food experience in a candle-lit tavern with a kick starter mug of a beer a glass of wine. Great dishes such as Vepro-knedlo-zelo, the staple Gulas, the traditional side dish –Knedliky, mouth watering Grilovane Klobasy, and a rolled pastry Trdelnik. Czech food is delicious, filling and addictive, so make sure you reserve enough time to walk off those calories.

Feel ROYAL on CASTLE TOURS – Now, you can create your own stories and tell the world how magnificent to be a Royal to the most historical castles in Czech Republic which have been well preserved throughout the centuries. Built in 1365 – The Karlstejn Castle, the Hluboka nad Vltavou Castle, the ever beautifl English neo-Gothic Lednice Chateau, the fairy-tale-like Prague Castle, and the Archbishop’s Chateu in Kromeriz, with was formerly a summer residence of an Archbishop and now a UNESCO heritage site.

Take a Day Trip to Bohemian Switzerland – also known as Czech Switzerland, is a picturesque region in the north-western part of Czech Republic. It’s fairy tale landscape of pine forests and deep valleys, with the majestic rock towers, gates, walls, ravines, rock cities and labyrinths are a sight to be amazed at during the entire trip. A romantic stroll along the river across narrow footbridges or by boat between the stone walls with steep sides can be an unforgettable experience.

Spend a time at OLD TOWN SQUARE – the oldest and most significant square of historical Prague, has been a witness to many historical events in the country. The square is dominated by the Baroque Church of St Nicholas, the Rococo Kinsky Palace, and the Gothic House at the Stone Bell. The center of the square has a statue memorializing the martyred religious reformer Jan Hus. The square used to be called “Big Square” or “Old Marketplace”.

Walk across the CHARLES BRIDGE in Prague – is a stone Gothic bridge that connects the Old Town and Lesser Town. During construction, it is said that egg yolks were mixed into the mortar to strengthen the bridge. Historians still has not come to any agreement whether it is true or not. If you want to experience the bridge at its most free hours, try to visit it at dawn.

Of course, why not BEER TOUR – As they say, what happens in Prague, stays in Prague. You need to taste the local beers and visit the interesting and unique places of microbreweries, traditional pubs, some hidden places or special venues of beer spots and bring some friends so that someone can attest that you have receive a BEER-DIPLOMA. Its good to be local, at a foreign land, sometimes.

Drown yourself with ARTS & CULTURE – the destination offers a variety of museums devoted to its history, to the classical, to contemporary art, to the sculptures, transportation and photography, sex and torture, the theater and opera houses, and so many more. Whatever cultural desire you may have in mind, you can find it in Czech Republic.